Antoine de Moret, better known as Antoine de Bourbon, was the Count of Moret, France and was a legitimized illegitimate son of the French King Henry IV and his mistress Jacqueline de Bueil. Antoine was an opponent of his brother King Louis XIII's policy of establishing a strong royal central authority . of France and its first minister Richelieu . Consequently, Antoine took part in the revolt of Gaston in 1630 and joined the army of their comrade-in-arms, the Duc de Montmorency . With this Antoine took part in the conquest of several cities in the Languedoc , where they were put on 1, September 1632 at Castelnaudary by Maréchal de Schomberg .

At the age of 25, Antoine de Moret was supposedly killed at the battle of Castelnaudary, in the no more than thirty-minute battle. Montmorency was captured and executed two months later. But persistent rumors declared that he had escaped to live to a ripe old age as a hermit in Anjou. There have been a few speculations that Monsieur de Moret, mentioned in the personal diaries of Philip LeMarchand, the infamous architect and artisan, is one and the same person as Comte Antoine de Moret.

As LeMarchand relates, the two met at Monsieur de Moret's estate sometime in the 1740s. After explaining his his tales of artistic frustration, Monsieur de Moret produced a slender volume from his collection of books and removed several loose sheets of paper, which he explained were from the diary of Gilles de Rais. LeMarchand was no stranger to the legend of Gilles de Rais - lieutenant of Jeanne d'Arc, who was later executed for murdering over a hundred children as sacrifices to the devil. He had become something of a boogeyman to the children of France.

Leafing through these pages, LeMarchand learned that Gilles de Rais was not evoking devils, but a 'Cenobite', as it was spelled in this text, who called himself Baron. Gilles de Rais had first learned of the Cenobites through an Angevine knight in 1426 who was subsequently imprisoned, accused of heresy. Monsieur de Moret assured LeMarchand of the authenticity of the formula contained within the sheets of pager, now in his possession, were one in the same as the formula utilized by Gilles de Rais. Upon this revelation, LeMarchand was filled with intense anticipation. Monsieur de Moret then imparted one final gift to LeMarchand - the box of Albertus Magnus. LeMarchand purchases both the pages and the box at considerable cost, requiring that he offer his architectural services when he returned to New York.

It is interesting if this individual is one and the same as the Count of Moret. Given that Antoine de Moret was born in the early seventeenth century (1607), he would indeed have been rather ripe (142 years old) by the time of his meeting with the young LeMarchand in the 1749. If this is true, it is unknown how he was able to achieve such a ripe old age. The ultimate fate of this Monsier de Moret is unknown. 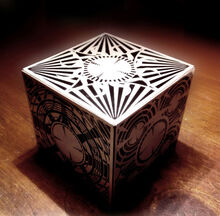 The original puzzle box of Albertus Magnus, which was in Monsier de Moret's possession.
Add a photo to this gallery
Retrieved from "https://hellraiser.fandom.com/wiki/Antoine_de_Moret?oldid=5748"
Community content is available under CC-BY-SA unless otherwise noted.