Clive Barker's Hellraiser #19, "Death Where Is Thy Sting?"

Aparius was a Cenobite that worked to benefit Hell, harvesting the products supplied to him by the cenobite bees rather than acting as one of Hell's explorers in pain. Aparius met his end when coming face to face with a Harrower.

Aparius, unlike other Cenobites, is Hell's beekeeper and as such never takes part in Hell's feuds, always staying within the confines of Hell's meadow.

Aparius was one day confronted by Harrower, Vera Wyshak, who travelled into the meadow with Kate Johnson to save the souls of her husband and ancestors. Vera easily dispatched Aparius by decapitating him with one of her divine bladed-boomerangs. After this Vera located and killed the queen cenobite bee and bled on the Elder Tree to send the souls of the Johnson family to Morte Mamme, where they would be cleansed and reborn within twenty-four hours.

Aparius was a large cenobite with a bloated face and a mesh netting covering his eyes, nose and mouth, most likely to prevent the cenobite bees from stinging him in the eyes or entering his body through various bodily passages. Aparius' stomach is covered in thousands of bee stings and cuts that leak pus and blood constantly and his neck is extended abnormally high with hundreds of metal rings, much like the Doomsdayer cenobite. Aparius wears a loose fitting black leather outfit complete with a belt containing various nozzles and valves that he would use to extract honey and pus from his cenobite bees.

Coincidentally both Aparius and Doomsdayer, both which share a similar appearance, were killed via decapitation. 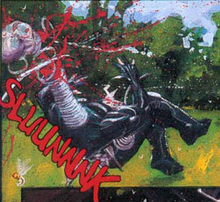 Aparius is killed by the Harrower Vera Wyshak.
Add a photo to this gallery
Retrieved from "https://hellraiser.fandom.com/wiki/Aparius?oldid=6245"
Community content is available under CC-BY-SA unless otherwise noted.