"Fine with me, fellas. I love a good fight."

— Atkins during the Vietnam War, upon being confronted by a trio of Cenobites, and refusing their offer to be taken back to Hell.

Atkins was a gung-ho soldier who became a Cenobite. As a soldier, Atkins was a deadly and efficient. Sometime during the Vietnam War he volunteered for a suicidal mission by entering a network of subterranean tunnels to hunt down North Vietnamese soldiers. He managed to kill a half dozen enemy soldiers before he got lost in the twists and turns of the tunnels attempting to find his way out. While attempting to find his way out, he inadvertently solved the puzzle of the tunnel and opened the gateway between the mortal realm and Hell. Three Cenobites appeared to take him to be remade into a Cenobite. Atkins refused, and fought with them instead. In the end, he was dragged back to hell and changed into a servant of Leviathan, to serve in Hell's Army.

As a Cenobite, Atkins is dressed in a commando uniform, a pair of bandoliers of bullets feeding into and out of his clavicle. He is a brutal Cenobite who favors heavy weaponry and mass carnage rather than slow torment. Akins' methods generally go against the Cenobite way of order, but he is allowed to do as he pleases so long as it follows Leviathan's commands.

During the Vietnam War, Atkins was once a revered soldier, so revered to the point that his immediate superior once even stated that, "No one hundred gooks could stand up to Atkins if he was buck naked in the middle of a field and had nothin' but a little bitty pen knife." When Atkins and his platoon came across a tunnel for a Vietnamese hideout in search for hidden North Vietnamese soldiers, Atkins volunteered to brave the tunnels himself and was told by his superior to, "Go get me a count boy. I wanna hear 'em screaming clean through the dirt. Go get them doggies!"

Upon entering the tunnels, Atkins managed to kill six Vietnamese soldiers, the last of which he interrogated only to be told that he and his comrades were "special" and "protected." Unsatisfied with the answer, Atkins snapped the Vietnamese soldier's neck and attempted to navigate his way out of the tunnel. Lost, Atkins attempted to dig his way out of the tunnel and upon emerging on the other side he found himself in the presence of three Cenobites.

Laughing Boy was one of three cenobites that came to guide Atkins to Hell after he had unknowingly solved the Tunnel of Love puzzle by moving through it in the correct sequence. It, alongside the cenobites Blue Boy and Halo II congratulated Atkins for solving the puzzle and informed him that he's to be brought to Hell where he'll be turned into a Cenobite by entering the Creation Chamber and being remade. Atkins rejected the offer stating that he wanted to return to his platoon. Laughing Boy, growing impatient, threatened to take him to Hell by force. Atkins responded, "Fine with me, fellas. I love a good fight." However, Atkins did eventually follow the Cenobites into Hell where he was made into "Hell's Armorer".

Atkins slew Doomsayer when Doomsayer held a rally in protest of the Leviathan over the recurring disappearances of other Cenobites; Atkins shot off Doomsayer's head by firing a spray of bullets through his neck, killing him instantly.

As Hell's Armorer, Atkins has access to virtually any weapon imaginable. He's been shown to be able to summon weapons to himself, as well as make parts of himself turn into weapons. Empowered by Leviathan, his ammunition is limitless. He is also highly proficient in close-quarters-combat after years of military training and even more years as a Cenobite. Like all Cenobites, Atkins is virtually immortal, being able to shrug off bullet wounds and other serious injuries with ease, as well as being able to recover from his injuries just as easily. He generally makes use of high-caliber machine guns, a combat knife that he keeps on hand and occasionally explosives.

Atkins is one of the few Cenobites depicted killing off another Cenobite putting him in ranks with the Doctor.

Atkins, during the Vietnam War. 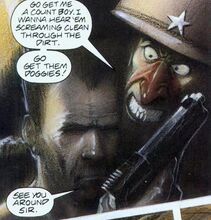 Atkins during the Vietnam War, being ordered by his superior to enter a tunnel to hunt down enemy soldiers. 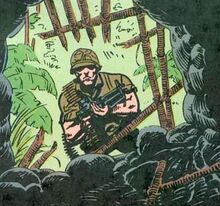 Atkins enters a tunnel, to meet his destiny. 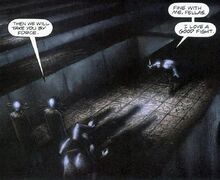 Atkins confronts a trio of Cenobites, after solving the 'Tunnel of Love' puzzle.
Add a photo to this gallery
Retrieved from "https://hellraiser.fandom.com/wiki/Atkins?oldid=6148"
Community content is available under CC-BY-SA unless otherwise noted.