Open/Deep Throat was once a very beautiful woman before she discovered the forbidden temptation of a Puzzle Box. Sensing her worth, she was transformed into a Cenobite, and eventually rose to the exalted position of High Priestess of Hell. Open/Deep Throat is a member of the Gash of the High Priest Pinhead.

Sister Nikoletta was a nun whose devotion to the Church waned as the seeds of lust and wanting grew secretly within her. Soon it was all she desired, to the point of obsession. One day, a man looking for a place to stay gave her the gift of a LeMarchand Box after sensing her desires. It has been said that once she opened the box, the Grillard cenobite came and began her transformation. As per Barbie Wilde's story in "Hellbound Hearts", he "used" each of her holes, and finally took her to Hell.

They say that her name is unmentionable. The horrid name, like her actions, is so vile it must forever remain unspoken. Those unfortunate enough to have discovered her true name have never returned to utter it. Therefore, she is referred to as merely Open/Deep Throat.

She is the fierce virgin demon in the Order of the Gash, with a heart of tar so black that it is incapable of love and sympathy. Incredibly violent, she is all but uncontrollable, even by Pinhead. Left-handed, impatient and relentlessly cruel, she wields sharp razors of both steel and tongue. To know her is to suffer the full tortures of Hell for eternity.

She remains one of the most elusive of the Cenobites, a far cry from her sister, Abigor, the extrovert, preferring to wield her power with a subtle grace that few in hell could manage. She is the High Priestess of Hell, symbol of the moon, of water, and of the power of woman.

Like all Cenobites, she is clad in a black leather outfit and is mutilated. She is shaved bald, with a nail piercing horizontally through her nose. A wire juts out symmetrically from both cheeks, arcing downward before it branches into three smaller segments on each side. These smaller wire segments pull back the edges of a deep incision on her throat, revealing a hideous gash, causing her to have a whispery voice.

In the The Hellbound Heart novella, she is the only Cenobite whose gender is discernible. Here, her mutilations are further described:

"It was the fourth Cenobite, the one that had never spoken, nor shown its face. Not a he now saw: but she. The hood it had worn had been discarded, as had the robes. The woman beneath was gray yet gleaming, her lips bloody, her legs parted so that the elaborate scarification of her pubis was displayed. She sat on a pile of rotting human heads, and smiled in welcome."

In the sequel four of the wires holding her throat open have been removed, leaving just one frame. When she is killed at the end of the second Hellraiser film, she reverts back to her original human form, revealing that she had once been a pretty brunette woman.

Open/Deep Throat returned in Hellbound: Hellraiser II, appearing (with other Cenobites) when Kirsty and Julia entered hell through the puzzle box.. Before "experiencing her flesh", they allowed Kirsty to wander around for a while. When Kirsty encounters them again, she shows Pinhead a picture of his human form, reminding him and the others that they have not always been Cenobites. Open/Deep Throat and the others are later sealed in the Pillar of Souls by Dr. Channard.

Over twenty years after death, it is revealed in the comic Clive Barker's Hellraiser - Pursuit of the Flesh, Part 1, that Open/Deep Throat and Chatterer were resurrected by Pinhead. 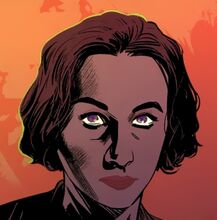 Sister Nikoletta before her transformation into a Cenobite. 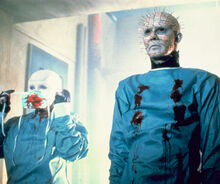 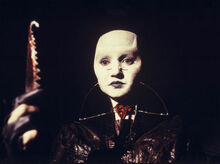 Open/Deep Throat as she appeared in the movie Hellbound: Hellraiser II.
Add a photo to this gallery
Retrieved from "https://hellraiser.fandom.com/wiki/Female_Cenobite?oldid=6528"
Community content is available under CC-BY-SA unless otherwise noted.