Julia Cotton is the step-mother of Kirsty Cotton, the protagonist of the first two Hellraiser movies. She was married to Larry Cotton, but had an affair with her brother-in-law, Frank Cotton. She was portrayed by Clare Higgins

After relocating to England, Larry and his wife Julia Cotton move into the abandoned home of Larry's deceased brother, Frank. Unbeknownst to the Cotton family, Frank was tortured, murdered and sentenced to an eternity of torment in hell after opening the lament configuration inside the home. While moving a mattress upstairs Larry cuts his hand deeply and begins to drip blood throughout the house until he reaches the room where Frank died and Julia tends to his lacerated hand. His blood provides the nourishment which enables Frank to escape hell and take a skinless form.

In Hellbound, Julia returns when a poor crazy man bleeds out on the same mattress that she died on. When she comes back, Dr. Phillip Channard feeds her some of his insane patients until she only needs one more soul. Later, she tricks Dr. Kyle by seducing him, and by drinking his blood, she was made whole again. Julia and Channard get Tiffany to open the Labyrinth, she betrays Channard and he becomes a Cenobite. While pursuing Kirsty and Tiffany, she finds and kills Frank by ripping his heart out. Julia finally catches up to them, but is then sucked back into hell as she tries to attack them.

"It wanted souls and I brought you!" - Hellraiser II

"I wanted everything." - Hellraiser II 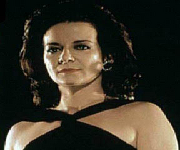 Julia (Queen of Hell) from the original ending of Hellbound: Hellraiser II

Add a photo to this gallery
Retrieved from "https://hellraiser.fandom.com/wiki/Julia_Cotton?oldid=6192"
Community content is available under CC-BY-SA unless otherwise noted.