Kirsty Cotton is a recurring protagonist of the Hellraiser series and the niece of Frank Cotton. She was one of only two characters to face the Cenobite Pinhead and outwit him. She was portrayed by Ashley Laurence in all of her appearences.

Kirsty's mother died when she was young. When her father remarried, Kirsty was always leery of her new stepmother Julia, even noticing how her uncle Frank watched the couple intently at their wedding.

When Larry and Julia took up residence at the family's old house, they invited Kirsty to come and stay. However, Kirsty wasn't keen on moving in with her step-mother. Instead she acquired her own lodgings in town with her own boyfriend, Steve. Not too long afterward, she suffered a nightmare in which she encountered her father's mutilated corpse. She also began to notice a strange derelict man shadowing her on the streets and at the pet store where she worked.

She further confirmed her suspicions that something was wrong when she eavesdropped on Julia bringing another man to the Cotton house. To her dismay she found Frank, now a skinless undead, draining corpses of their flesh and seeking her next. Seizing a strange box from Frank's room, she fled for her life, before fainting in shock several blocks away.

Waking up in a nearby hospital, Kirsty was questioned by the doctors about what had happened and the box she had acquired. While waiting for the police to arrive, Kirsty began to play with the box. Without warning, the wall split open to reveal a shadowy corridor.

As Kirsty tried to frantically close the box, the Cenobites appeared, intent on taking her to their realm. Thinking quickly, she made a deal with them. Having deduced that Frank had encountered the Cenobites and escaped them, Kirsty offered to lead them to Frank if they left her alone. She ran home to try and warn her father, but it was too late: Frank had skinned Larry and assumed his identity. Despite her rage and anguish, however, she lured Frank upstairs, where the Cenobites arrived and tore Frank apart.

However, the cenobites were all too quick to break their end of the agreement. They chained Julia to the mattress of her bed and mutilated her corpse. They then came for Kirsty, but Kirsty, having retrieved the box from Julia's remains, was able to reverse the sequence she had discovered, closing the gate she had opened and sending the Cenobites back to their realm. Setting fire to Frank's belongings, she tried to burn the box as well but the derelict that had been following her suddenly appeared, snatching the box and revealing himself as yet another Cenobite creature before flying away.

Following the incident, Kirsty passed out. Police officers brought her and Steve to the Channard Institute, where she was to be held for observation. Unbeknownst to her, the institute's director, Phillip Channard was a collector of the puzzle boxes and wanted to use her to access the Cenobite realm. While resting, Kirsty began seeing visions of her father, skinned and bleeding, and decided to try and find her father in hell. She befriended a doctor named Kyle McRae and went on the search for her missing father.

Meanwhile, Dr Channard retrieved the bloody mattress from police evidence and tricked a patient into spilling more blood on it, thus resurrecting Julia. Channard used another patient named Tiffany into opening the box and releasing the Cenobites. Arriving at the scene, Kirsty entered the Cenobite realm herself to be confronted by Pinhead and his minions. Kirsty demanded information about her father, only to be flatly told Larry was "in his own hell, and quite unreachable." Rejecting the answer, Kirsty pressed on until she found a simulation of her family's old home. To her dismay, Kirsty found the source of her visions was Frank, who had lured her into his own hell to molest her. Spotting an old photo of Frank on a dresser, Kirsty set fire to it, destroying Frank's image and reducing him to his skinless form.

On her way out, Kirsty encountered Tiffany, who had been left to wander aimlessly about the corridors. As the two made their way back to the outside they were confronted by Julia, but tricked her into a wind tunnel where she was ripped from her own skin. As they exited the Realm and made their way out of the institute, Channard - now transformed into a Cenobite - attacked them. Fleeing back into the Cenobite corridors, Kirsty and Tiffany ran straight into Pinhead's group. However, Kirsty had a surprise for Pinhead. Having found a dossier on a long-missing army captain in Channard's office, Kirsty revealed to pinhead that he had once been that very person. She gave Pinhead a photo of when he was human, triggering Pinhead's memories of his former identity. The cenobites helped Kirsty fight Dr. Channard, but died doing so. However, Kirsty and Tiffany used the distraction to escape and recover the puzzle box, with which they then confronted Leviathan, the silent ruling entity of the Cenobite plane. With the box, they rendered Leviathan inert, then escaped just as the portals slammed shut. Kirsty and Tiffany then left to start a new life and a new beginning.

Apparently, when she was in the Channard Institute, she had been recorded and she was explaining what the puzzle box does.

She was married and she was originally thought to have died in a car crash, but her husband ended up dying instead. She had opened the box again, and when Pinhead appeared, she made a deal with him; she would bring him five souls in exchange for amnesty. Pinhead was immediately intrigued and agreed to her terms. The five souls were that of her husband Trevor, his co-worker who was plotting with him to kill Kirsty for her money, and the three women that Trevor had been cheating on her with.

"Fairy tales ... My father didn't believe in fairy tales either ...Some of them come true, Mr. Ronson. Even the bad ones."

"I hope it's everything you hoped it would be." 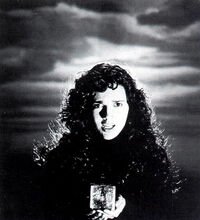 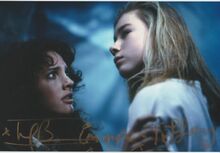 Kirsty Disguises Herself Her Stepmother 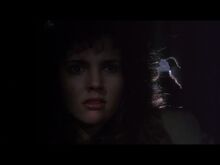 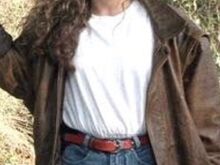 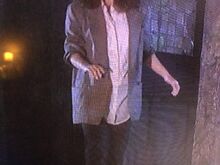 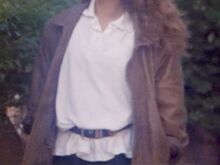 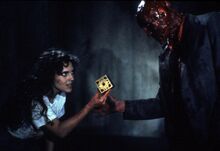 Add a photo to this gallery
Retrieved from "https://hellraiser.fandom.com/wiki/Kirsty_Cotton?oldid=6310"
Community content is available under CC-BY-SA unless otherwise noted.