Tiffany is a patient from the Channard Institution (an insane asylum). She has a talent for solving puzzles and had been in the institution for 6 months before her fateful encounter with Kirsty Cotton and the Cenobites.

Tiffany was named by a nurse since she had never spoken and had no family to visit her. She was brought to Dr. Channard and his institution by her mother, who had sought his help in "curing" Tiffany of her obsession with puzzles. However, her mother suffered a mysterious fate, so that Tiffany could be later used for Dr. Channard's quest in opening the Lament Configuration, which she was instructed to solve. When she did so, the pathway to the Labyrinth opened.  Chatterer, Butterball, and the Female descended on her to drag her into Hell, but Pinhead approached and reminded them that it was not hands that summon them, but desire.

Tiffany ran into Kirsty in the Labyrinth and Kirsty told her that she had to close the box in order to close the pathway to hell, since she knows how to solve it.  She and Kirsty were able to escape the Labyrinth, and attempted to leave the Channard Institute, only to find all of the patients attempting to solve copies of the Lament Configuration. They went back and recovered the Lament Configuration, knowing that Tiffany had to close the pathway, and were confronted by the memory of finding Tiffany's mother being taken away and the truth of Dr. Channard. Kirsty acknowledged Tiffany's need to solve the puzzle when the Channard Cenobite attacked them both.  While Kirsty distracted Channard, Tiffany was able to solve the puzzle.  Tiffany and Kirsty were able to escape Hell as the pathway closed permanently.

Tiffany and Kirsty left the institution together, ready to leave the traumatic escapade behind them. Tiffany's current whereabouts are unknown.

"I have to go back!  I have to finish the puzzle!" - Hellraiser II 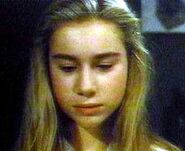